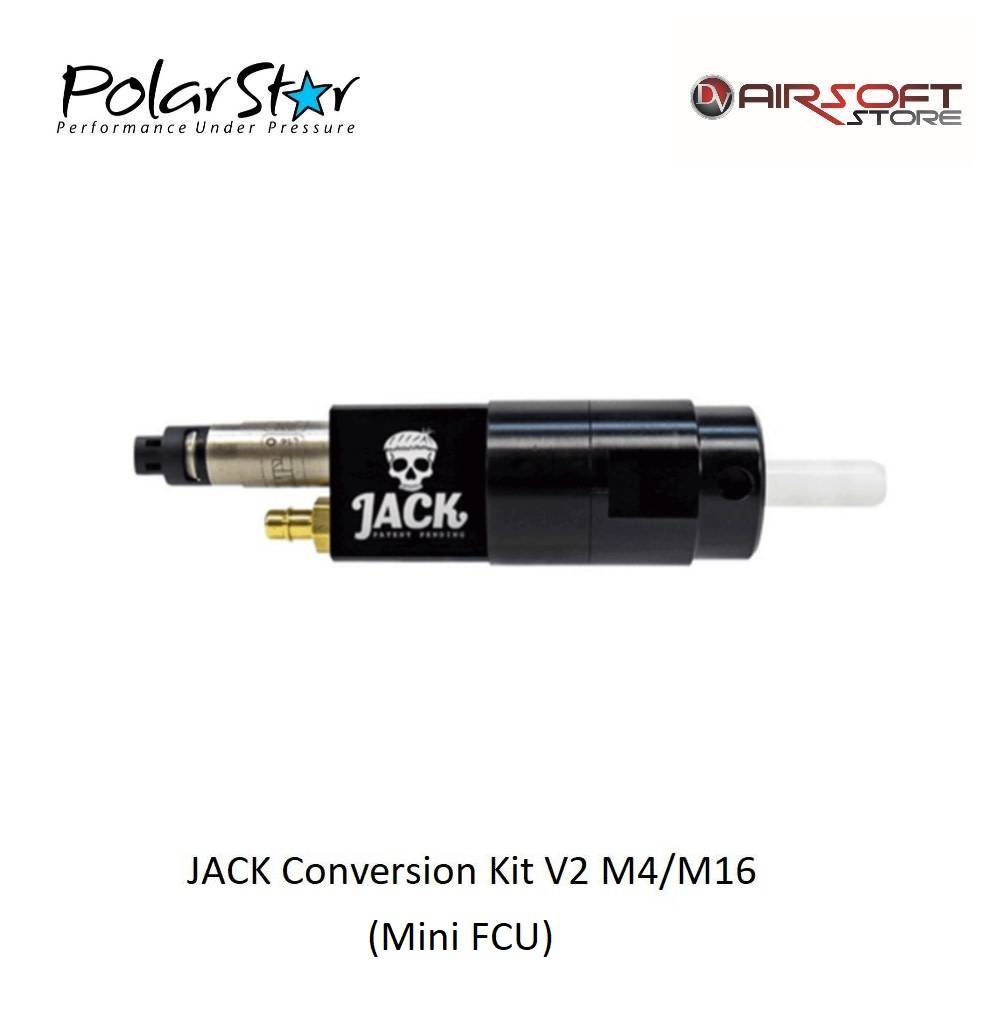 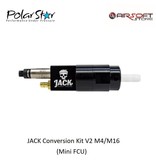 The JACK™ system was designed to answer the demand for an affordable, high performance HPA (High Pressure Air) conversion for AEG's. The system is a drop-in cylinder replacement that is universally compatible with a wide range of gearbox versions that have center-line nozzles.

Similar to its sister product, the F1, it replaces the original gearbox components with a programmable pneumatic system allowing for higher performance and greater reliability over a gear driven system. Although economically priced, JACK™ still retains the same performance and quality you have come to expect from PolarStar products.

JACK™ has only 1 moving part, the nozzle, which acts as its own poppet valve which is piloted by the solenoid. With the exception of the poppet being integral to the nozzle, the valve is similar to the poppet valve used in the previously released Fusion Engine™ and is what gives JACK™ its signature muzzle report. The system itself only has 6 parts and can be completely disassembled by hand in a matter of seconds so the system is very reliable and easy to maintain.

Just like all other PolarStar HPA conversions, JACK™ also allows for easy velocity adjustment. Using a standard M4 as an example, velocity can be adjusted from below 280fps and up to approximately 500fps with a .20g BB. This can be done simply by adjusting input pressure and poppet dwell to fine tune your rifles velocity in increments of just a few FPS at a time. Maximum velocity potential of the system will vary depending upon the barrels length and tightness of the bore. Longer and tighter barrels will yield a higher velocity while shorter or wider barrels will be yield a lower velocity.

More about the mini FCU :

New voltage regulators allow for extremely low power consumption in sleep mode. Drawing under 28uA while idle, the Mini FCU is over 300 times more efficient than the original Standard FCU and can operate in sleep mode for close to one year on a small 250mAh pack.

Elimination of the solenoid MOSFET, joystick and LCD, along with careful selection of the remaining components, allowed the size of the Mini FCU to be reduced significantly compared to other FCUs. It's small size allows the Mini FCU to fit inside the gearbox shell keeping the control unit and wire harness protected from damage.

Despite it's size, the Mini FCU actually expands on the functionality of the Standard FCU by adding an integral Motor Control Unit and support for 4-position selectors. In order to make setup as easy as possible the MCU output port can be used with either a box mag or optional speaker to provide feedback during programming.

Like the Standard FCU, the Mini FCU automatically enters sleep mode just seconds after the last shot fired. Unlike the Standard FCU, the Mini draws under 30uA (micro-amperes) while sleeping. In order to achieve such low power usage the Mini FCU uses two voltage regulators to reduce the battery pack voltage to the 5VDC used by the FCU and solenoid. The first is a small regulator with extremely low quiescent current (current draw while sitting idle), used to supply power to the microcontroller. The second regulator is a larger, higher current regulator used to power the solenoid. This regulator is shut down until the solenoid is energized, effectively reducing it's idle current to zero. The combination of these voltage regulators and the IO pin configuration allow the Mini FCU to draw as little as 28uA when in sleep mode. To put that into perspective, the Mini FCU could run in sleep mode for over 300 days on a small 250mAh battery pack.

Remaining components were carefully selected and placed to minimize the board size resulting in the most compact Fire Control Unit available. The Mini is small enough to be mounted in place of the spring guide or simply placed inside of the gearbox shell. This completely encloses the wire harness so that there is no way it can be caught and damaged. A #4-40 screw hole is provided on the PCB for mounting to an optional "spring guide base" or just about anywhere else it will fit.

Despite its small size, the Mini FCU contains an integral MCU (Motor Control Unit). The MCU allows the full battery pack voltage to be switched on and off based on the trigger pull in order to control the box mag motor or other devices that operate at the same voltage as the battery pack.

When the optional speaker module is connected to the MCU port the Mini FCU can provide audio feedback to make programming easier by letting you know what setting you are changing as well as confirming the changes. If a box mag is being used, the box mag motor itself provides the same feedback as the speaker module.

Although the Mini FCU retains the same 5-wire header and harness as the Standard FCU it is only designed to control a single solenoid, leaving one position open. The "extra" position has been reused as an additional input which can be connected to a second selector switch allowing the Mini to handle guns with 4-position selectors.

Since there is no joystick or screen, the Mini FCU is programmed through a series of menus controlled by the trigger. To enter programming mode hold the trigger while plugging in the battery. If the trigger is not released after 5 seconds the unit will reset to factory defaults, otherwise it will enter the main menu. The standard menu consists of settings for:

Once in the main menu the unit will wait for trigger input.